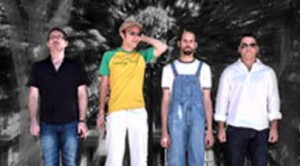 Madrid based Garrett Wall Band are hoping to help kick-start the summer with a new single in June on their Mondegreen Records label. Being released around the same time as the World Cup the somewhat fittingly titled 2 Hours Later will be released on iTunes and all digital download stores and will also be available as a 4-track CD which will feature songs from their previous two albums, the recent Hands & Imperfections and 2008′s Sky Pointing. The single will go to radio in late May and will be available at the bands live shows and from their website www.garrettwallband.com

Having completed a week long promo tour of the country in February the band are due to return to Ireland, volcano permitting, for more live shows starting July 7th with a gig in Clonmel at Brazil’s Café, July 8th at Crane Lane Theatre in Cork and band favourite the Tally Ho in Longford. The band will also be performing in Boyle’s Pub in Slane in a post-World Cup final daze no doubt, and at the Glór Sessions on Monday July 12th in the International Bar, Dublin.